Irv Gordon‘s story made The Guinness Book of Records when he logged his three millionth mile in the lovingly maintained Volvo P1800 that he’s owned for forty-eight years. To put this awe-inspiring distance in perspective, imagine six round-trips to the moon; or think about driving back and forth from Miami to Seattle… nine hundred times. The moral of his tale can be summed up in three words: Volvo equals longevity.

From the Earth to the Moon…and then some!

Will Van Allen’s and Greg Miller’s story features a 1965 Volvo hearse, one of only three in the entire world. Will and Greg named their rare Scandinavian vehicle Valhalla, in honor of the banquet hall of the Norse god Odin, where Valkyries brought slain warriors to rest. Hundreds of viewers were pleasantly surprise to find Valhalla in Hawthorne, New Jersey, of all places, when Will and Greg displayed the sleek, black vehicle in last month’s Classic Car Show.

From hearse to eternity! — photo courtesy of Jeff Saunders

Far less austere, Sandra Ramos’s bright purple 1986 240 Volvo is a mobile work of art whose hood is decked out with hundreds of figures and symbols that represent the goddess in all of her multitudinous forms. Folks smile whenever they see this unique Volvo cruising down the road, and it’s easy to spot in any parking lot. But don’t let its whimsical aspect fool you. This car addresses a very serious concern. Sandra — who founded the first women’s shelter in the United States — continues to operate Strengthen Our Sisters, a refuge for battered women and children in West Milford, NJ. The proudly idiosyncratic car celebrates courage in the face of adversity and the need to reinvent ourselves every single day. We offer Sandra and SOS our support by giving them cars that our clients have generously donated to her cause. 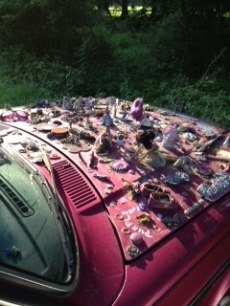 Toys on the hood.

Don’t you have a story to share? Send it to Diane @paulsvolvo and we’ll post it here on our blog.